I thought I knew Aussie wine. I knew that it wasn’t only that wine with a yellow Aboriginal drawing of a kangaroo and boomerang. Isn’t it high quality Shiraz/Cab blends from Barossa Valley?  The wines are big fruit bombs, right?  Or maybe austere Clare Valley Rieslings. They are light, fresh, petrol and lime driven, right?  My perception of Australian wine was turned upside down after the James Busby Travel trip I took in October. I felt like Doctor Strange entering Kamar-Taj for the first time. What I thought I knew slapped me on the palate and turned my olfactory bulb inside out. Here is what Australian wine is all about!

Bill Downing makes some of the best wines in Australia.  His wines are all about terroir, wines made in the vineyard.  Most of his fruit is sourced from specific bio-dynamic growers.  His approach to making wine is not making it, but letting it become what it intended to be.  It is a hands-off approach resulting in unique mind-blowing wines.  Bill believes terroir is much more than just growing grapes in a particular soil type, but it is about the people, the climate, the animals and plants in that place which influence the wines.Winemakers in the Mornington Pennisula struggle with cool wet weather. Pinot Noir does extremely well.  With a minimal approach, whole berry and cluster ferments, they make wines that are aromatic and elegant. Story and Garagiste Vineyards source grapes throughout the Mornington and the Grampians.  Best part of cool climates is the ability to make sparkling wine. And I am not talking about Sparkling Shiraz, but proper method Champenoise with Pinot and Chardonnay. 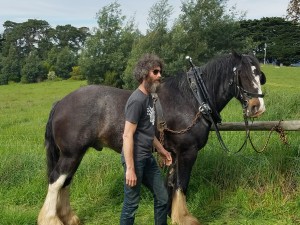 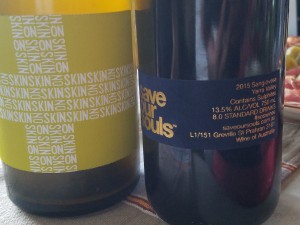 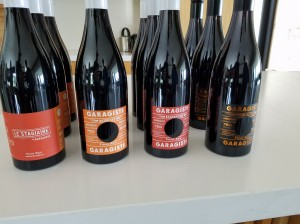 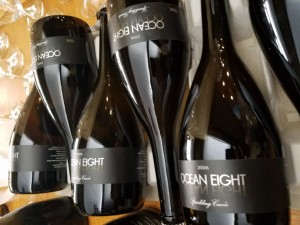 The Yarra is located in Victoria and divided into the lower Yarra and the upper Yarra.  The region was once planted with grapes to make sparkling wines, today we find some of the best Chardonnay and Pinot Noir can be found here.  Yarra Chardonnay is unique and coming into its own. Tim Wildman gave 12 reasons why Yarra Chardonnay stands out: cooler sites, early picking, better clones, hand harvesting, whole bunch press, smaller ferments, old oak to mature, larger oak formats, no batonage, do not force malo, use of screw caps, sulfites are set in vineyard and natural winemakers are looking for textural Chardonnay.  The Yarra is home to some of the best wines in Australia, DeBotoli, Luc Lambert, Gembrook, Mac Forbes, Giant Steps, Yarra Yering and many more. 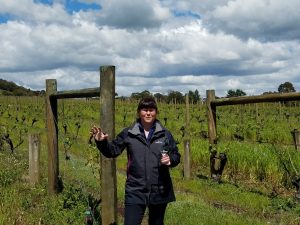 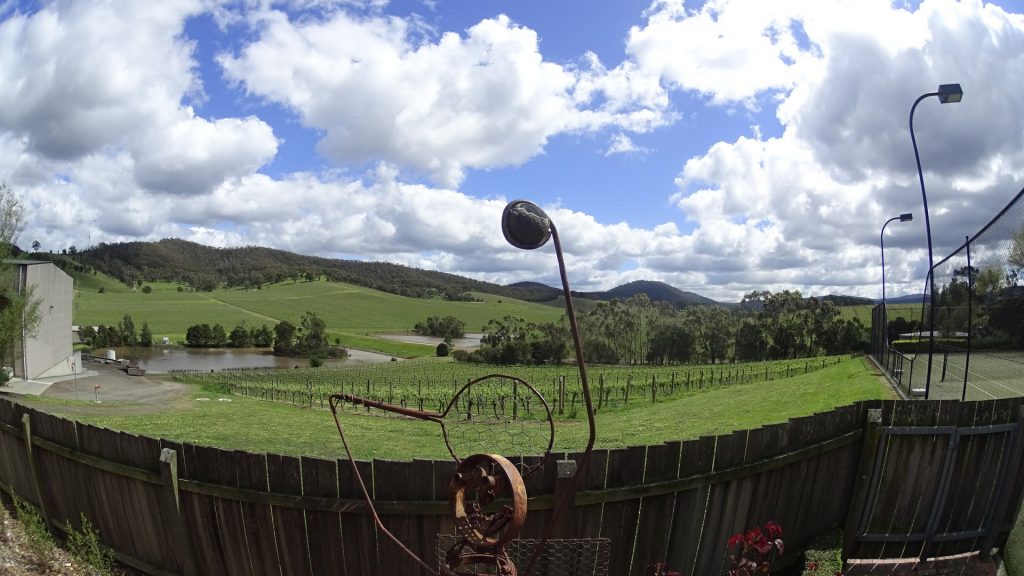 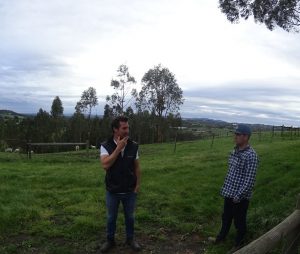 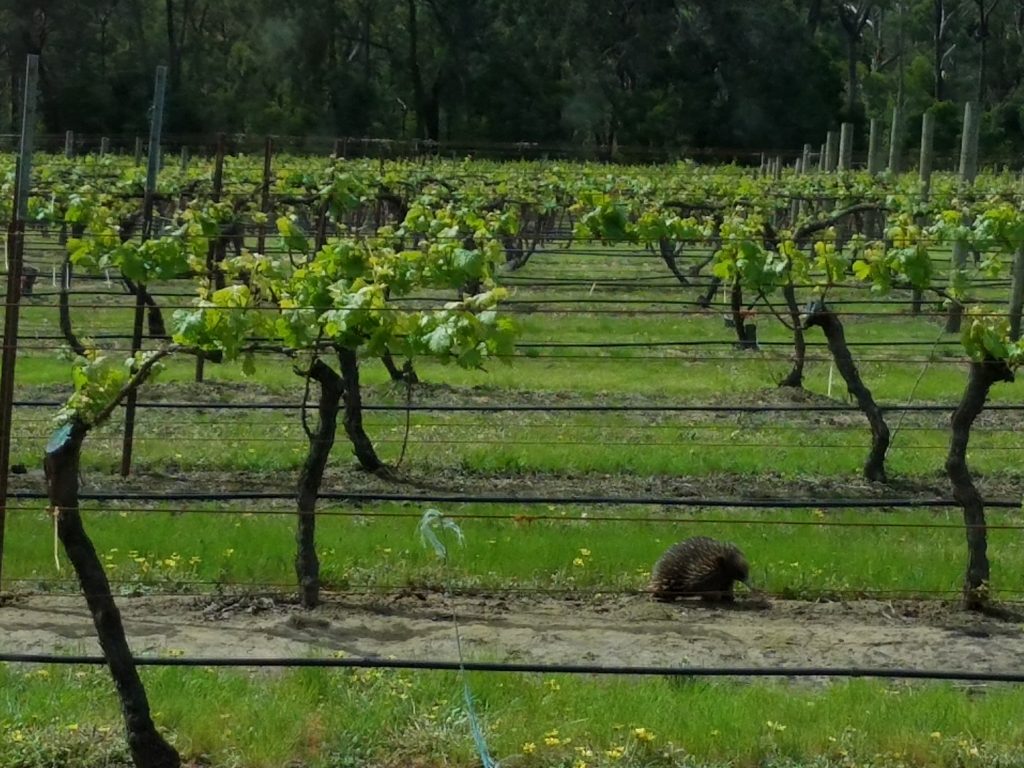 A little friend in the Gembrook vineyards.

The first wines made in Australia were ports. The tradition goes back almost 200 years. As modern wine-making techniques began to develop, more and more wineries began creating dry still wines. Today there are a handful of wineries still focusing on their family traditions. Many of these are in the Rutherglen and Barossa Valley.  Muscat is the grape most commonly used. Wineries such as All Saints, Campbell’s and Seppeltsfield pride themselves on fortified dessert wines of high quality.  Today, some young winemakers are looking back and experimenting with fortified wines with a natural twist. 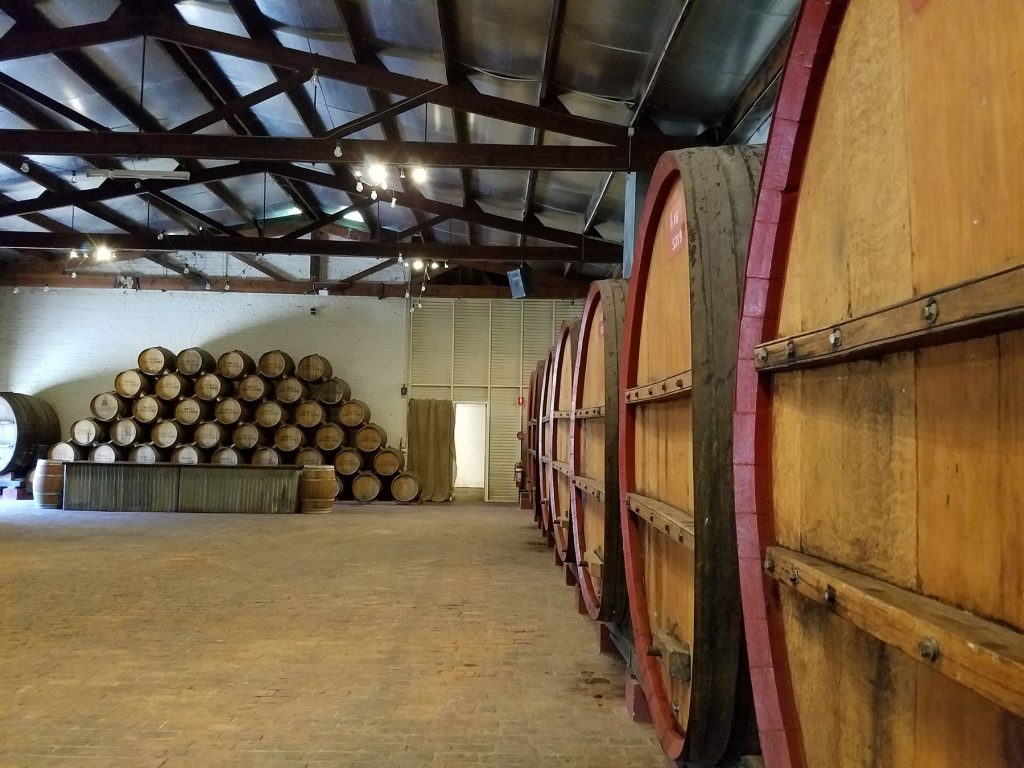 Solera System and large format barrels at All Saints. 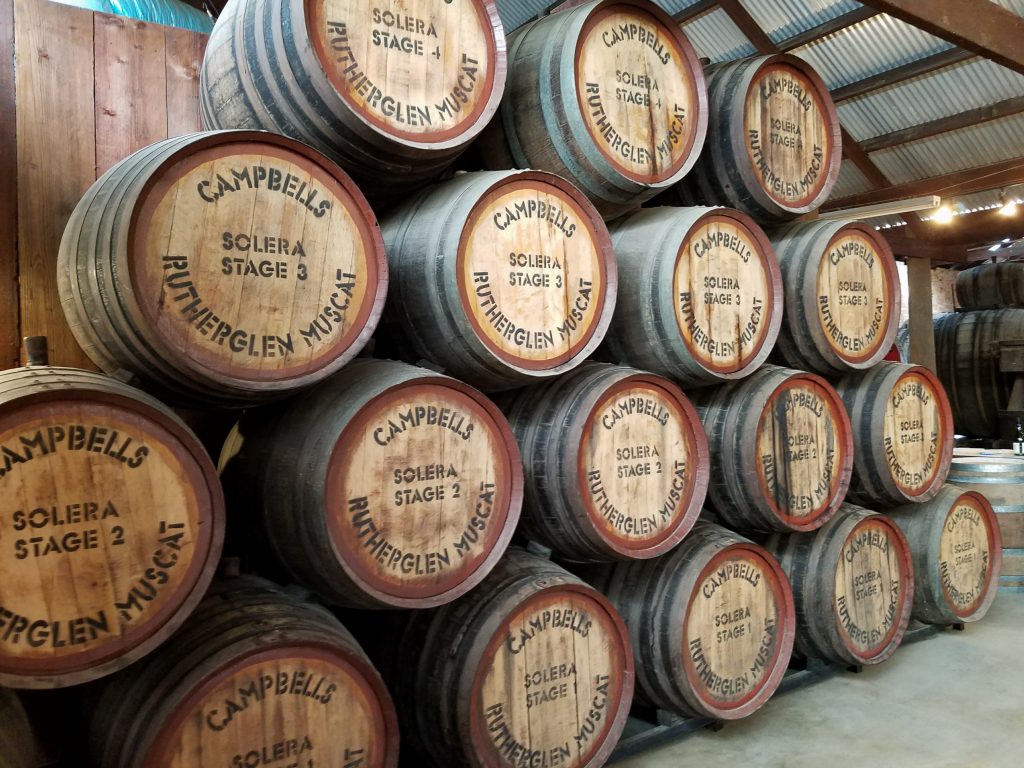 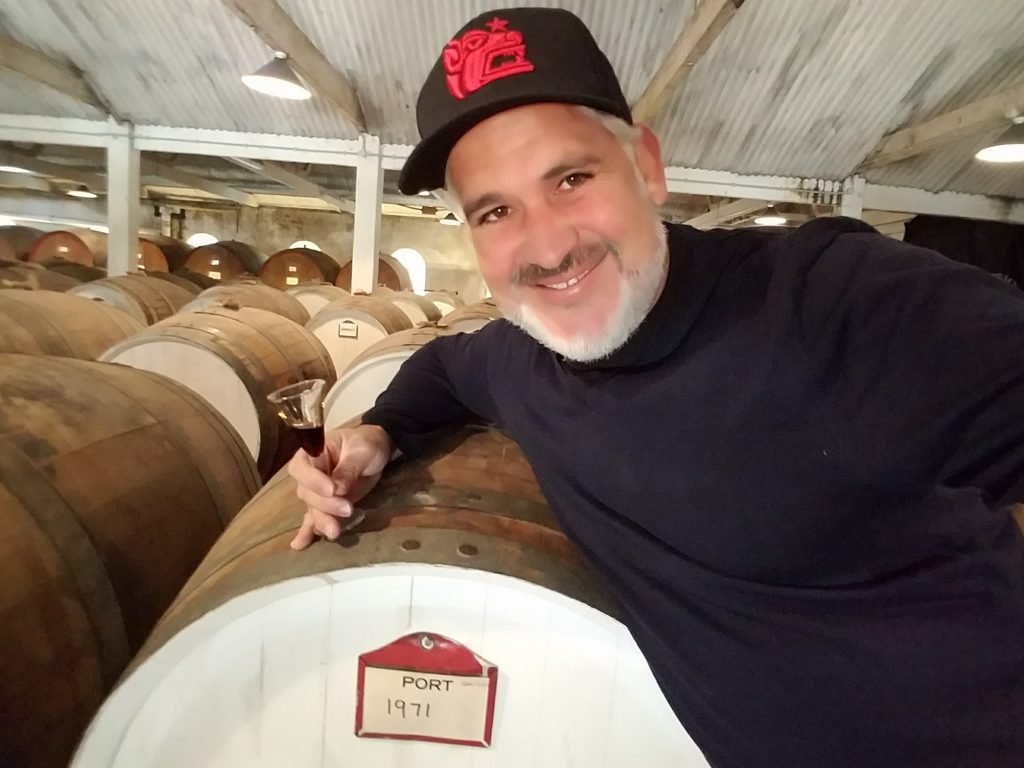 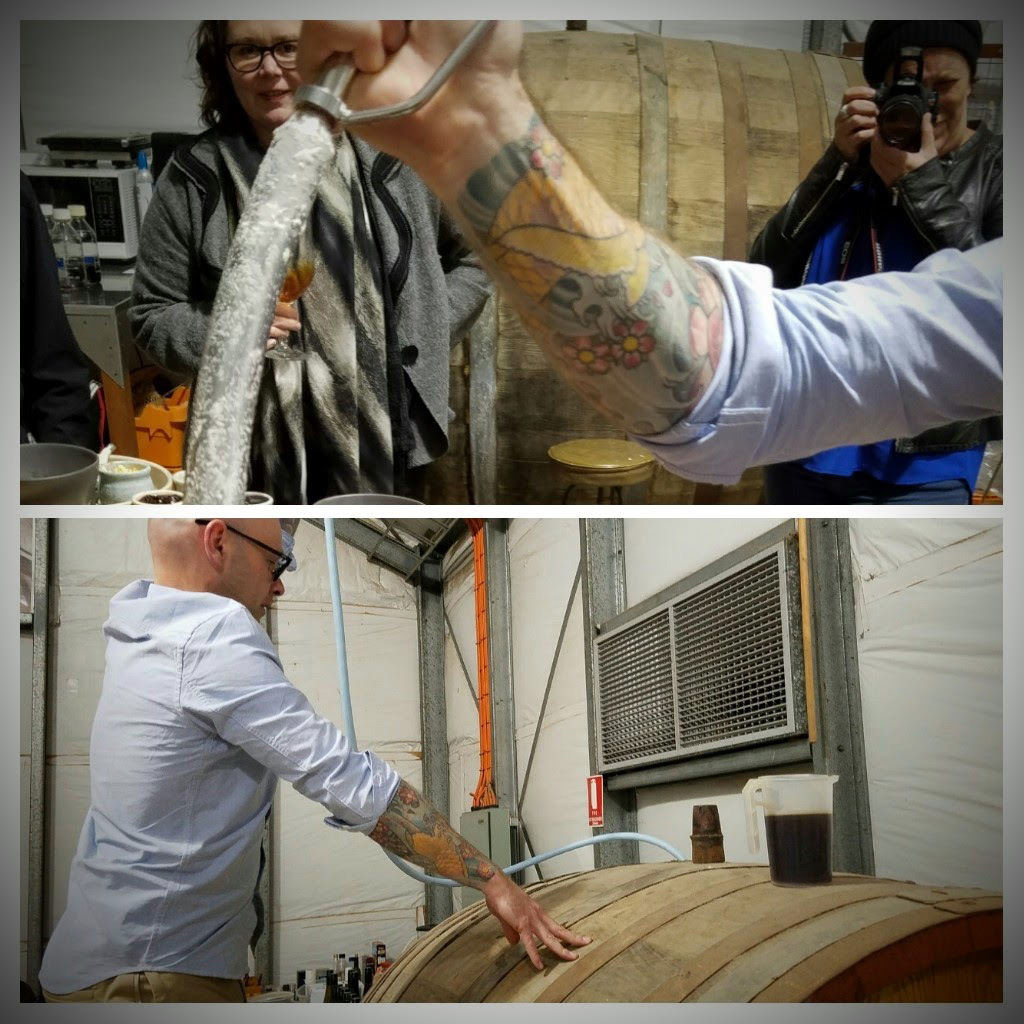 Old vines is a loose term. In some places it can be a 10 to 20 year old vine. California may have 50 year old vines. France might have some 70 so years old. Both of these regions were devastated with phylloxera. Australia has been phylloxera free due to it’s isolation from the rest of the world and sandy soils. Some areas like the Yarra Valley are under threat, phylloxera has started showing up. However, in places such as the Barossa. McLaren Vale and Grampians there wines being produces from vines which were planted on the 1840′-60’s.  This old plant material produces very little juice, but the little it does produce is heavenly. If California calls wines from vines planted in the 80’s old vines, then Australia should call them ancient vines. Stand out wineries producing old vine wines are Tahbilk, Darenberg, Best’s, Langmeil, Cirillo, Penfold’s and Yangarra. 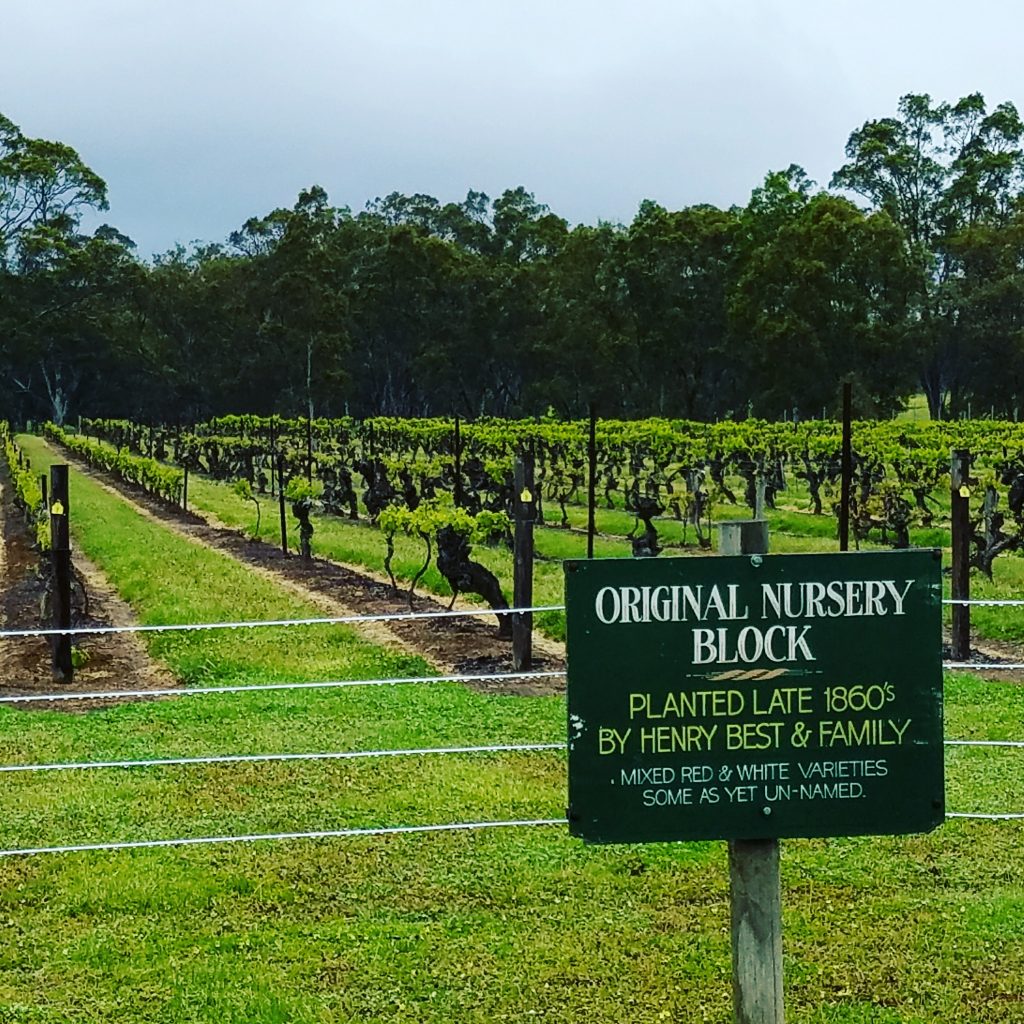 Mixed planting of old vines at Best’s in the Great Western. 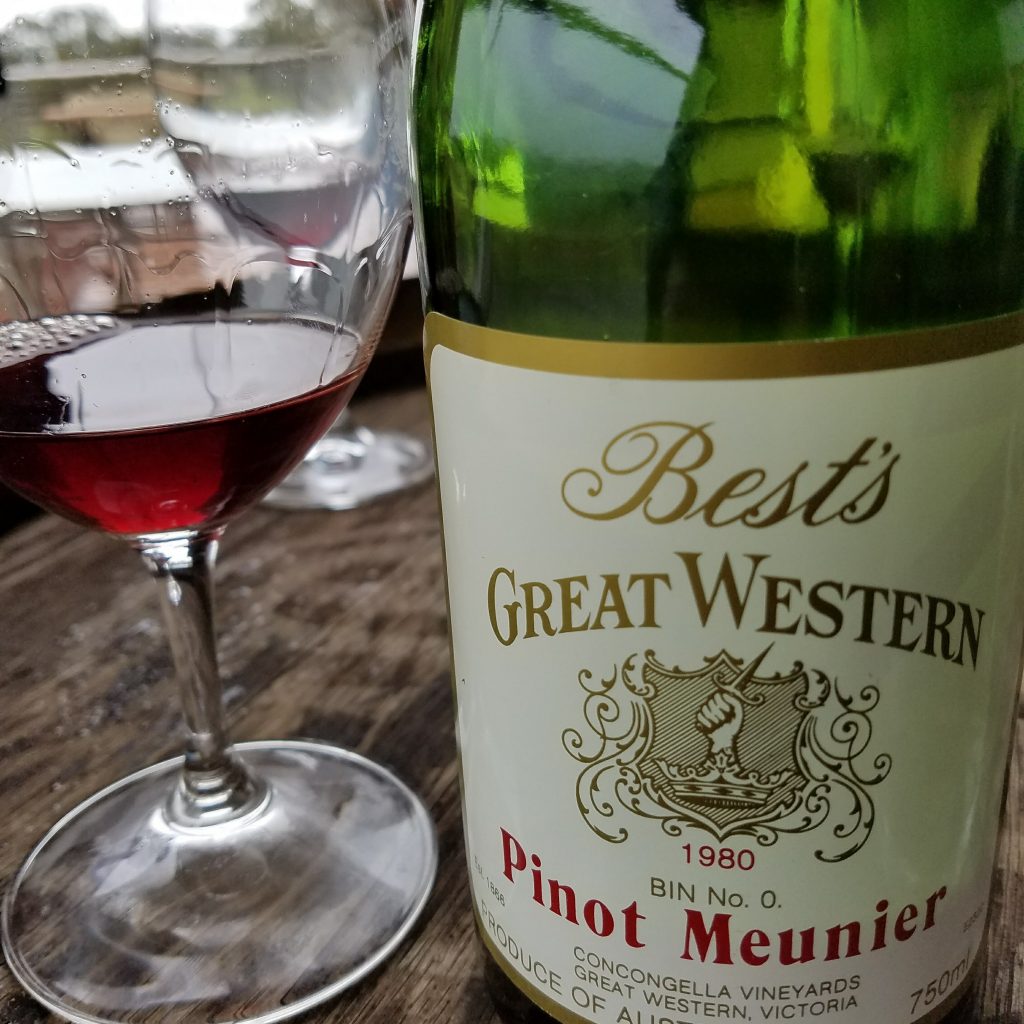 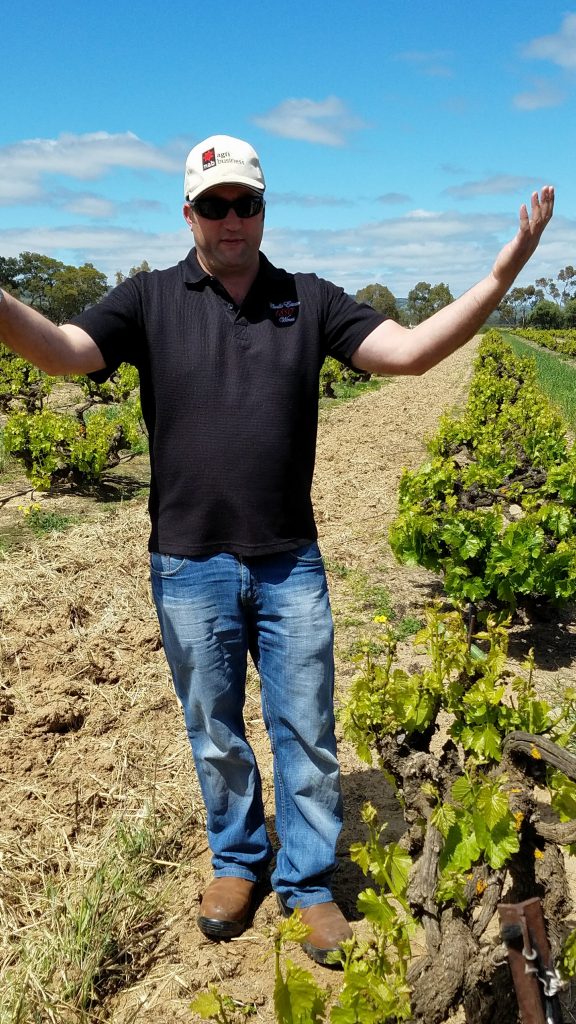 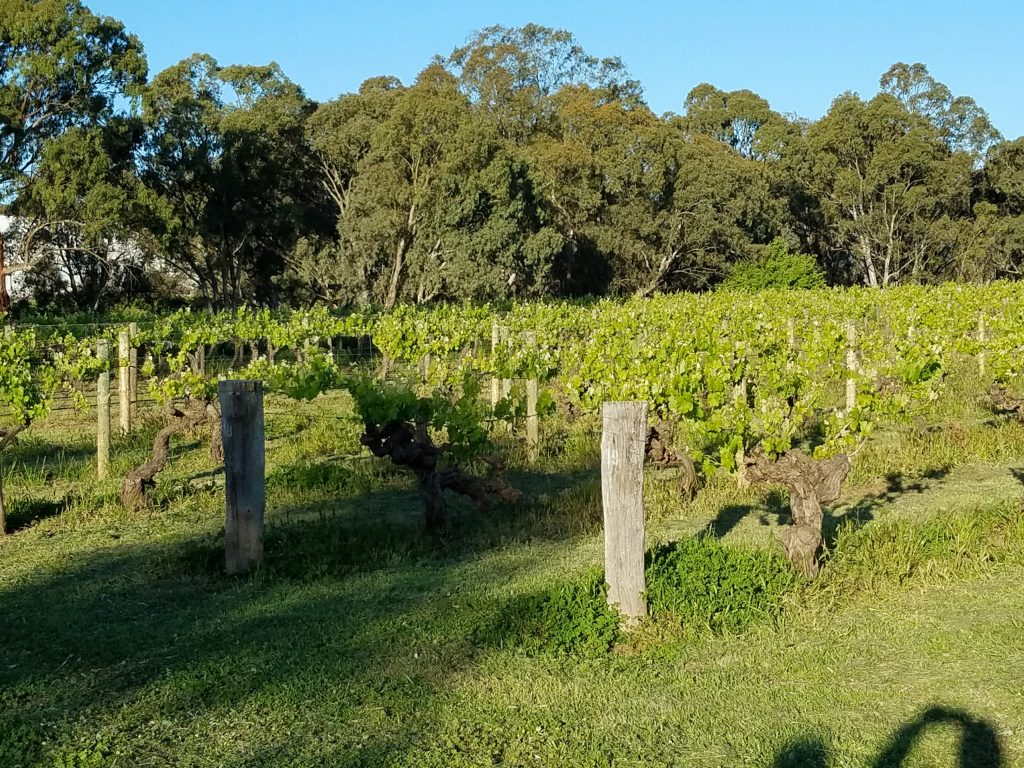 Langmeil Shiraz vines planted in the Barossa in 1843

If there is one thing that stood out for me in Australia was to see how far ahead the Aussies are in regards of organic viticulture and natural wine-making.  You may have experienced natural wines from different regions in the world, but what many forget is that in order for a natural wine to succeed in the glass, its process needs to begin in the vineyard. Most of the young winemakers in Australia have embraced this concept. Their wines are not faulty, but fresh and bursting with acidity. Winemakers from all over Australia are fed up with flabby fruit juice called wines and are in search of structure. The Adelaide Hills are filled with garage winemakers producing some of the best Pinot Noirs on the planet. Their hands off approach to wine-making is best seen in their big reds, where the alcohol and fruit does not over power the pristine acidity and ripe fruit. 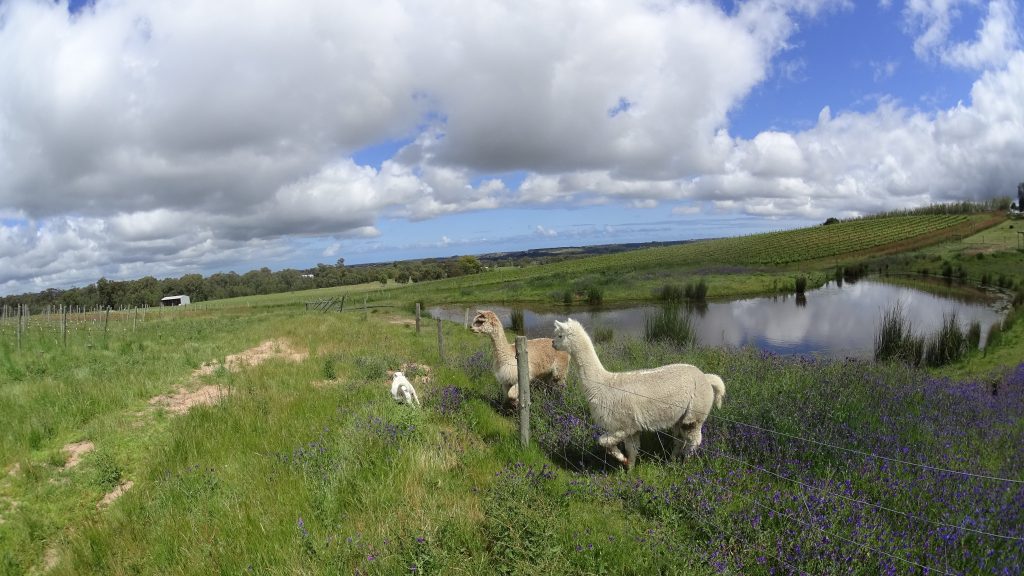 Alpacas in the bio-dynamic vineyards of Gemtree in McLaren Vale 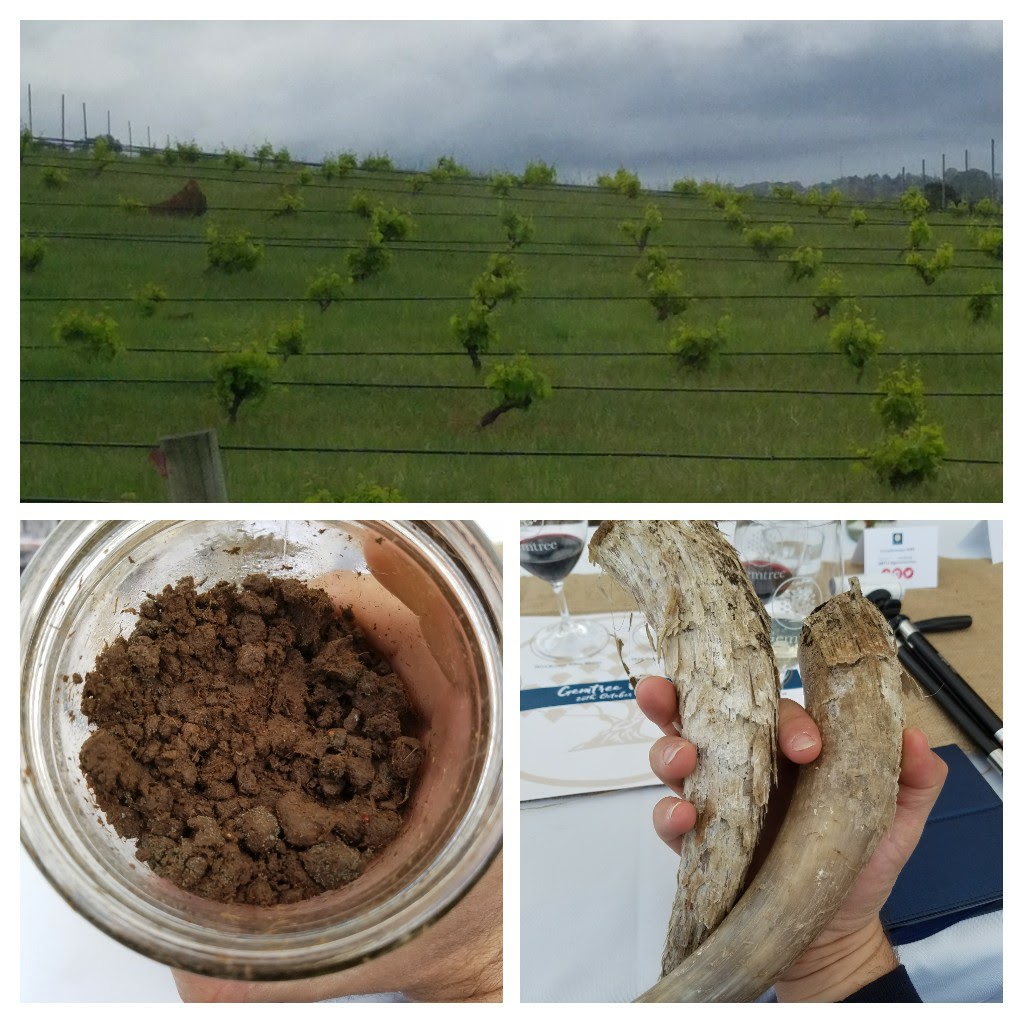 The bull horn filled with fertilizer, essential in biodynamic farming 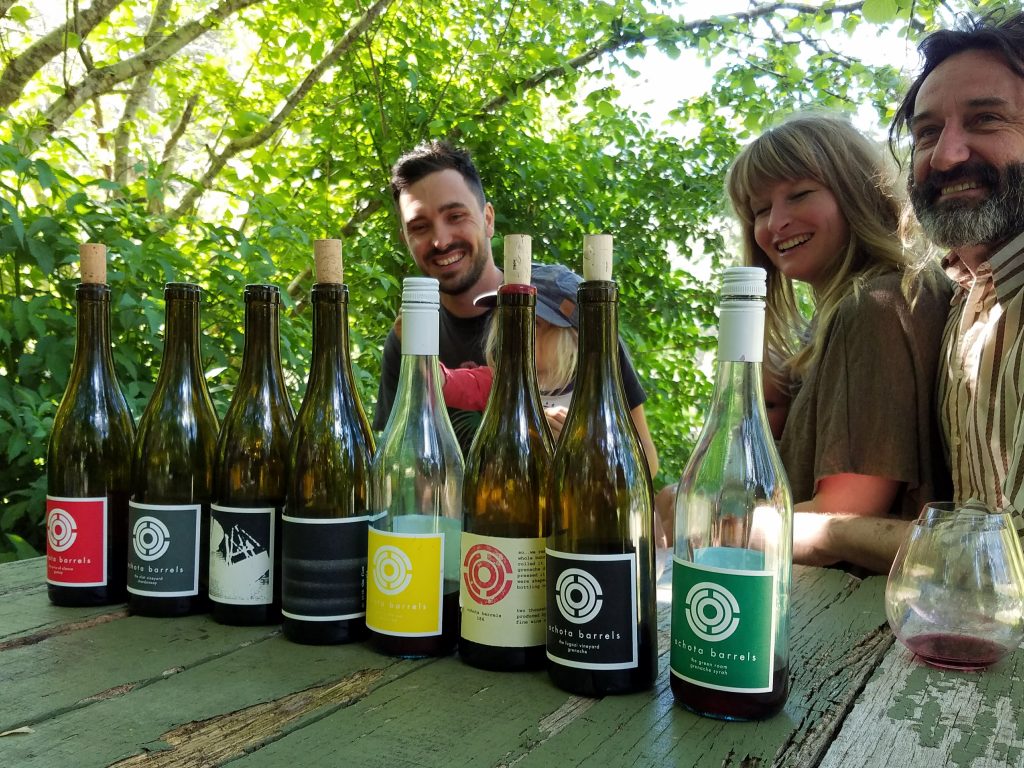 One of the best wines I tasted in Australia, Ochota Barrels. 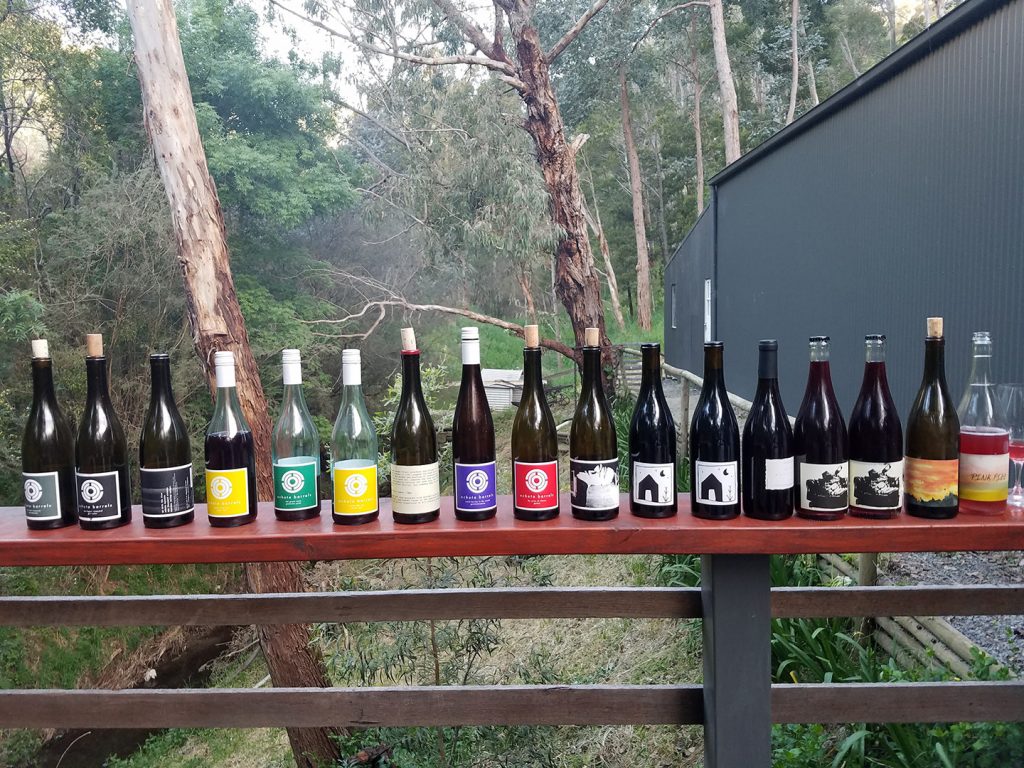 A line up of natural wines in the Basket Range in the Adelaide Hills.

Lastly, there are few regions in the world which make wine from sacred sites. We can say that the vineyards of La Tache or DRC in Burgundy are sacred since they were once owned by the church. We might throw Elqui in the high desert in Chile as being sacred, however I haven’t had wines from there that taste sacred. I came across one of the most interesting vineyards in the world, the Bindi vineyard in the Macedon ranges on the slopes of Mt. Gisborne in Victoria. Upon our arrival to the winery there were herds of kangaroos chilling and watching us approach as if they were guarding their sacred land. The soils are composed of quartz and rocky earth. There was a sense of serenity in the vineyard. At dinner our group bonded when we discussed what brought us into the world of wine. This sharing was magical. But to top it off the wines were outstanding. We tasted Chardonnay and Pinot Noir from 1991 to 2015, and each wine was divine.  This has got to be one of the most memorable tastings of my life. 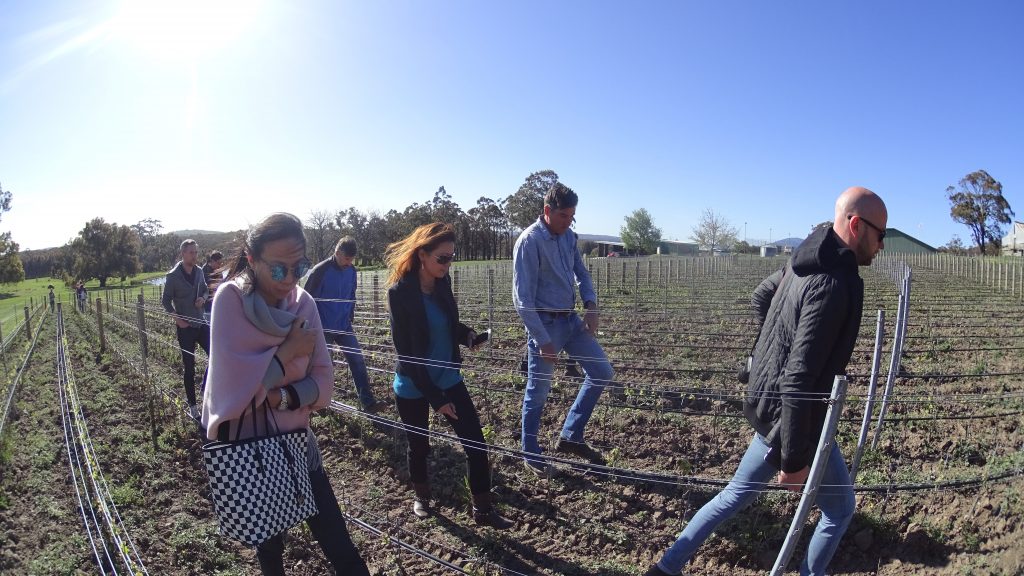 Walking through the quartz vineyard with winemaker, Michael Dhillon 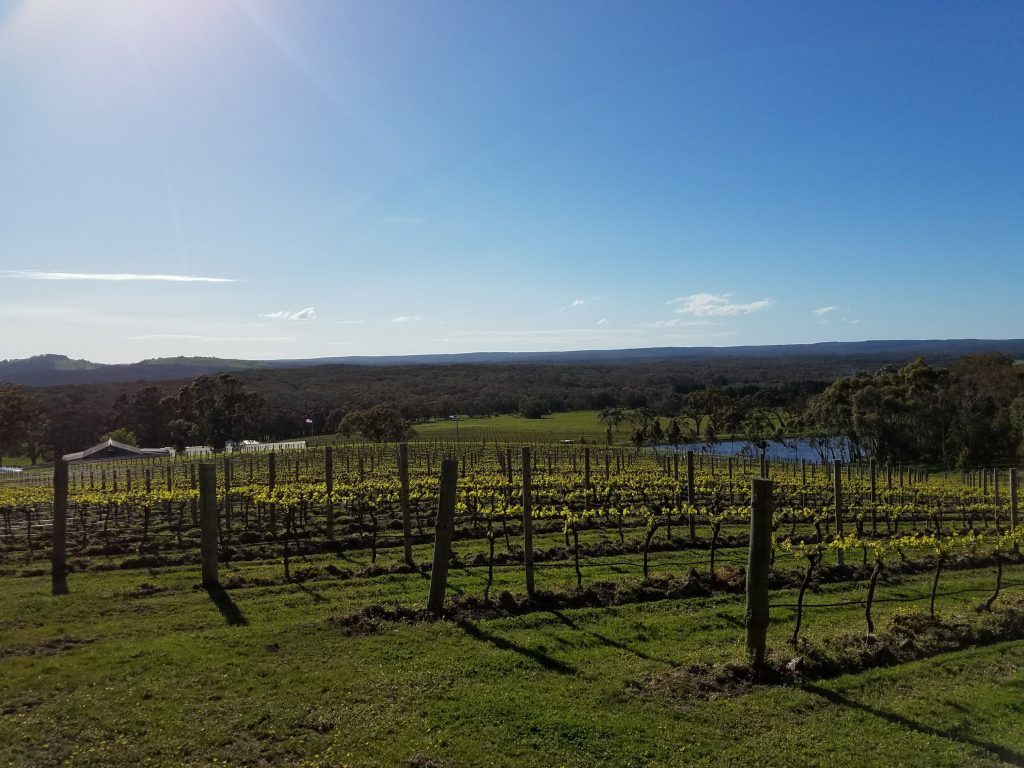 The magical vineyards of Bindi

To learn more about my journey in Australia visit THE BUSBY TRAVEL JOURNAL. 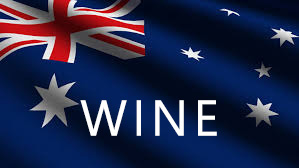 The time is here and I am about to embark on a journey to the land down under.  It has been 15 years since the last time I visited.  Back then I was in a van driving from one coast to the other.  Although I did get to see some vineyards, the purpose of that trip had very little to do with indulging in the wine culture, rather experiencing the nightlife culture.  Today I am older and more mature and look forward to revisit Australia with brand new eyes. This time, a bit less glassy-eyed. 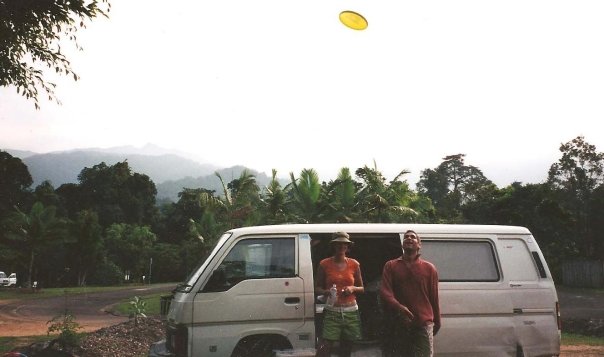 Australian wines have received a bad reputation over the past ten years as these labels with animal graphics invaded our bottom shelves of our supermarkets.  It is similar to what happened to Merlot in the 90’s.  Merlot was the “it” grape and everyone wanted to be seen with her.  So much so that wineries sacrificed their integrity and populated the bottom shelves with cheap Merlot.  This gave Merlot a bad name, and when Miles came out and said, “I don’t drink no F…’n Merlot”, it was the end.  Merlot is a fantastic wine, but it will take years before she rises to the top again.  Well, the same could be said for Australian wine. 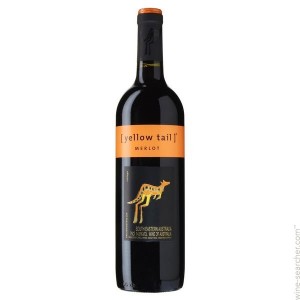 Those animal printed bottles gave a bad name to Australian wine.  It is unfortunate to see a nation with a long history of producing high quality wines come to decline because of a Kangaroo with a boomerang.  A few weeks ago, Matt Stamp MS, gave a seminar in San Diego. He blind tasted us on an Australian Semillion.  The wine was outstanding! It had racing acidity, expressive fruit and confused everyone for French Chenin Blanc. I was blown away.  I am looking forward to discovering more wines like that.  I can’t wait to taste Grenache from 80-year-old vineyards, Riesling with mouth-watering acidity and take a peek at the craft beers.

I look forward to sharing my experiences with you.  Hopefully I will have a new fondness for the land down under. Cheers!

Finally arrived in Australia! All my flights had a delay but I made it to the meeting point in the nick of time. I met up with my group in Melbourne and immediately jumped on a bus headed for Gibbsland to meet Bill and Rachel Downing of Downing vineyards.  What a surprise! We arrived in this farmhouse wine making facility in the countryside. I immediately knew this was going to be a good trip.  Each of the large barrels had a name, one of them was Maurice.  Coincidence? 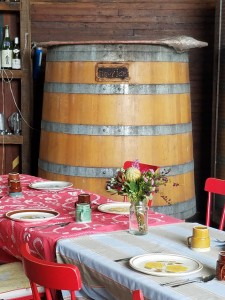 Bill Downing focuses on small production Pinot Noir from Gibbsland, Yarra Valley and the Mornington Peninsula.  He is a natural wine maker. He is focused on the vineyard.  The vines are small and kept low to the ground.  There are native grasses and plants throughout the vineyard creating biodiversity. It is dry farmed bio-dynamic vineyard. Bill believes in biodiversity and says he makes his wine in the vineyard and not the winery.  Wine making is easy, he just presses the juice and puts it in barrels, the rest is up to the grapes. This hands off approach was a relief to see, especially since when I think of Australia I think big opulent wines.  Downing wines are austere, yet elegant and true to variety.  I think he would correct me and say they are not true to variety, but true to place. 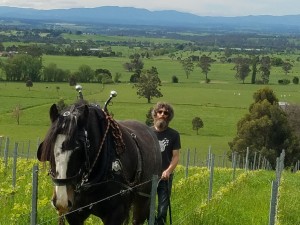 If this is an indication of what is to come, then I am in for a magical two weeks.

Below is a copy of one of our Newsletter for my wine club, PRIME CRU.  PRIME CRU is a wine club I created at Island Prime Restaurant in San Diego, where we turn our guests on to special values only available through the PRIME CRU. We also offer tastings, wine sales and special seminars. You can see some of the seminars on the Seminars Page.

go to: http://www.islandprime.com and click on the PRIME CRU logo to join.