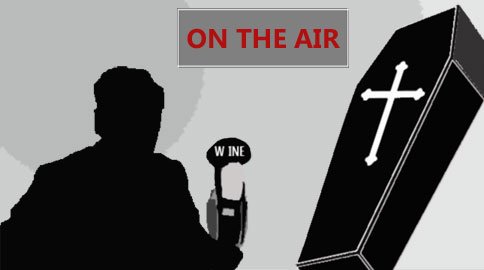 A wine interview with Jim Morrison of the Doors.

For some time now, I have tried to get wine interviews with some of my favorite musician, movie stars and other celebrities about their wine habits.  I have found it very difficult to get past their fan clubs and PR firms to just get a basic questionnaire filled out.  So I have diverted to plan B.  I found it to be so much easier to hone in on my psychic abilities and interview those celebrities that have passed away.  It seems as though they are more willing to sit through the interview.  Most dead celebrities do not want to lose touch with their fans.  They are so desperate that they are willing to answer the questions of a lowly wine blogger in San Diego.

Momo:  I must start by saying that you, Jim Morrison, have always been an inspiration to me and my alter ego of wanting to be the greatest rock star.  Your poetry, your stage shenanigans and your propensity as a chick magnet put you at the top of my list of idols.  Many might say that your drug and whiskey use was pure stupidity, but we both know you were trying to obtain something more spiritual.

Jim Morrison:  Yeah man, that is some really deep stuff you’re bringing up.  The majority of my actions were induced by drugs and alcohol.  However, when I “broke on through to the other side” I met my spirit guide, an old Indian.  He took me on a journey through my life and revealed how wine made me who I was.

Momo:  That is fascinating.  By the way we now call them Native Americans.

Jim: Oh how groovy, that is so cool…Native… American…Right on!

Jim:  Funny you should ask. Let me tell you what happened…”Is everybody in? The movie is about to begin…”  Sit back, turn off the lights, turn on the “rain storm audio” and let me tell you my story as it relates to wine.  When I “broke on through to the other side”, I met my “Native American” guide and he said… “You chased your pleasures here, dug your treasures there, but can you still recall that the best times in your life were influenced by wine”.  And like the ghost from Christmas past he took me on a journey through my life and in every turning point I saw the magic of wine.

Momo:  Now this is getting interesting. Let me get this straight, every important moment in your life was influenced by wine, and you never realized it until you died?

Jim:  Exactly Momo!  I did not drink a lot of wine, I stuck to whisky; but when I did it was momentous.  Unfortunately I was always out of my mind I could not remember what I drank. There was one time that I drank a French wine which had a picture of a naked woman on it.  My buddies told me it was one of the greatest French wines but the French never included it in the top wines.  Apparently they believed that only 4 wines were worthy of being called the best.

Momo: Are you saying that you drank Mouton Rothschild 1963 with Bernard Dufour’s label of an orange woman?

Jim: I guess so. So when I wrote “Five to One” I was hoping the French would include this great wine in the top five. “Gonna make it, baby, in our prime”.

Momo:  I am not sure if your song had anything to with it, but in 1973 Mouton joined the ranks as one of the five 1st growths.

Jim:  Wow, that is great to hear.  It really deserved to be there.  Here is another time wine lit my fire.  One day we were jamming in LA and we were sipping on this long skinny blue-bottle.  It had a picture of saint and with German words on it and was very sweet.  All day long we were struggling with one of the verse in “The End”.  After drinking about a case of that stuff, all the bottles were piled up in a corner.  I caught a glimpse of the pile and it dawned on me, the lyrics that needed to complete the song.

Momo:  So you were drinking a Liebfraunmilch Riesling from the Rheinhessen? Isn’t that Blue Nun?

Momo:  Yeah, I’d have to agree with you, I never understood those lyrics, but I did sing them over and over.

Jim:  Let me continue, my Native American guide took me back to Venice when I met the most beautiful girl.  I got my wits together and said, “hello, I love you, won’t tell me your name”.   She said her name was Pam and that she didn’t speak to strangers,  because “People are strange and you will never remember my name”.  However, once I opened a bottle of red and offered to share with her, she relaxed.  I thought it was strange cause the wine was Spanish but the label was Italian. I think it was called the Sicilian Vegan.  Pam was a vegetarian back then, I think that’s why it caught Pam’s eye.

Momo:  Wow, so when you met your life partner, Pamela Courson,  you drank Vega Sicilia Unico?  Did you ever wonder if it was you or the wine that won Pam over?

Jim: I  don’t want to think too much about that, I don’t know if I could handle the truth.  What I soon realized that when I wrote some of my greatest poems and songs I was under the spell of wine.

Momo: Give me some more examples.

Jim: When I wrote “The Crystal Ship” I was drinking a brandy from an expensive glass bottle.  I finished it and starting pouring some white wine into it called “Carton Wine” or something like that.  And it had the name of a religious emperor.

Momo:  The lyrics, “Crystal ships are being filled…” came from you drinking Corton Charlamagne from a bottle of Louis XIII?  That is ridiculous!

Jim:  I guess so.  Another time I had just finished a thanksgiving dinner at our house with some friends and band members.  I went into the back yard and grabbed a bottle from the table.  From what I recall it was a light-bodied French red which had a Spanish name La Taco, or something like that.  Regardless, the wine was amazing and I wrote the lyrics to “Spanish Caravan…Carry me Caravan take me away. Take me to Portugal, take me to Spain”.

Momo: Spanish Caravan was a result of you drinking La Tache, a grand cru from Burgundy?  Just when I thought this was the craziest interview, it just got crazier.  You are one of the greatest poets of our century and you had it wrong the whole time.  A French wine caused you to write about Spain!?

Jim: Look Momo, my whole life I was searching for meaning.  And it was in those spontaneous moments that I happened to be drinking wine.  Of course I was so out of my mind on other substances, I never realized it.  Not until after my death did any of this make sense.  I could have had a longer life if I had just stuck to drinking wine.

Momo:  That is crazy Jim, I worshiped you throughout college.  I tried every form of mind altering intoxicant because I wanted to be like you.  I thought that if I got super high and out of my mind, then I too could break on through the doors of perception in my mind.  And now you mean to tell me that the secret is wine!

Jim: Exactamundo!  It all came together one day in 1971 while I was in a bath tub in France.    I was drinking a sweet white wine that Pam had left in the ice box.  I think it was called Chateau something with a D..Y..and Q.  I can’t remember.  But when I took that first sip I knew… “this was the end, my beautiful friend”.  My heart skipped a beat, and then stopped.

Momo:  Are you saying that when you died in Paris you were drinking Chateau D’yqem?  What a way to go.

Jim:  Oh yeah, it was.  I think I had for seen my death because the lyrics of “End of the night” explained my death to the “t”.

“Take a journey to the bright midnight,

Realms of bliss, realms of light.

Some are born to sweet delight”

Momo:  HoIy moly, you’re right. I feel so better now.  All I do, is drink wine!  Maybe it is wine that has allowed me to hone my psychic ability and connect with you.  One last thing, can you tell us what heaven is like?

Jim:  Certainly, listen carefully…”Can you picture what will be, so limitless and free, desperately in need…of some…red wine in hand, in an…angelic land”.

Momo:  What an enlightening interview and thank you Jim Morrison.  It sounds like the music is over, let me turn out the lights and I’ll see you on the other side.

1 Comment
How Are Oak Barrels Made?
Has the Summer Left You High and Dry of Wine?