Wine can be made almost anywhere in the world along the 30th and 50th parallel.  (Well, that is except for in the oceans.  I have to say that, because I know that someone will comment if I do not clarify.  It’s in the nature of wine geeks to know more and let others know how much they know.)  The history of winemaking began some 8-10,000 years ago in the Caucasus Mountains near Mesopotamia.  Since then, cultivation of grapes for wine production spread throughout the fertile crescent into North Africa, Phoenicia, Greece and into Europe.  At first, the Romans were not wine people.  They eventually learned from Etruscans, Carthaginians and Greeks how to make wine.  Once they did, they spread wine into the what we know as today as the greatest wine growing regions in the world, Rhone, Mosel, Burgundy, etc…  The middle ages stifled the growth of art, culture and technology and everything was in control of the Christian church.  When the renaissance and industrial revolution came about, wine left the shores of Eurasia and ended into South Africa, Australia and the Americas.  This spread of viticulture has left the sommelier and wine lovers in need of experiencing it all.  There are also winemakers that go abroad and learn to make wine from other winemakers.  They learn from others different farming techniques and solutions to the many hurdles in wine making.

I was able to  travel around the world in my twenties.  It was the best thing I could have done.  I learned more from traveling than I had in college.  Being exposed to other cultures allowed me to continue to seek something new and different.  Naturally, when I immersed myself in wine, I took that same approach and today I seek wines that are not our everyday wines.  I began to wonder how many winemakers have worked in different parts of the world?  I found out that most tend to get experience elsewhere and then return to their homes or place of inspiration and make wines.  However, not many actually work several harvests a year.  They might have gotten some experience elsewhere, but they do not continue making wines there. This is why this next seminar with Nick Goldschmidt is so special.

Nick Goldschmidt is a Kiwi winemaker who has made wine for a very long time.  His career began in 1982 in research and eventually led him through New Zealand and California as a winemaker.  I remember first hearing about him when I was buying wine in San Francisco for a small restaurant.  I loved his story.  Back then he was making wines in New Zealand, Australia and California.  He wanted  to make wines using the best grape variety that grew in that region.  For example, under the Forefathers Label he made Sauvignon Blanc in New Zealand, Shiraz in Australia and Cabernet Sauvignon in Alexander Valley.  This means that for Nick, wine making was and still is a full-time job.  Just as one harvest ends, he is off to the next region to do another harvest.  The true nomadic winemaker.

Today, Nick Goldschmidt has stopped producing wines from Australia, but is now producing wines in Argentina and Chile. Although the Chilean wines are not in the market place yet, the Argentinian Malbec is tasting beautifully.  Let’s not forget about the rest of the world.  Although he is not making wines in other regions, he does consulting in Spain and Canada.  A winemaker is only as good as his connections.  I say that, because the secret to making great wines is getting great fruit. Nick’s long history and close relationships in California and other parts of the world have allowed him to source fruit from some of the best vineyard sites.  Nick is down to earth.  Although he can justifiably charge a high price for his wines in the daughters series, “Chelsea, Katherine & Hilary”, he chooses not to.  The fruit comes from some of the best vineyards in Oakville, Dry Creek and Alexander Valley.  It is in his nature to make wines that are accessible to all.

On August 14th, at Vintana in Escondido, Nick Goldschmidt will hold a panel discussion and tasting where I will ask him questions about his wines, wine making techniques and the differences between the many regions he works.  The event will be in the Lexus Technology room from 6- 8pm.  All the wines tasted will be available for sale.  Light hors d’oeuvre will also be served. 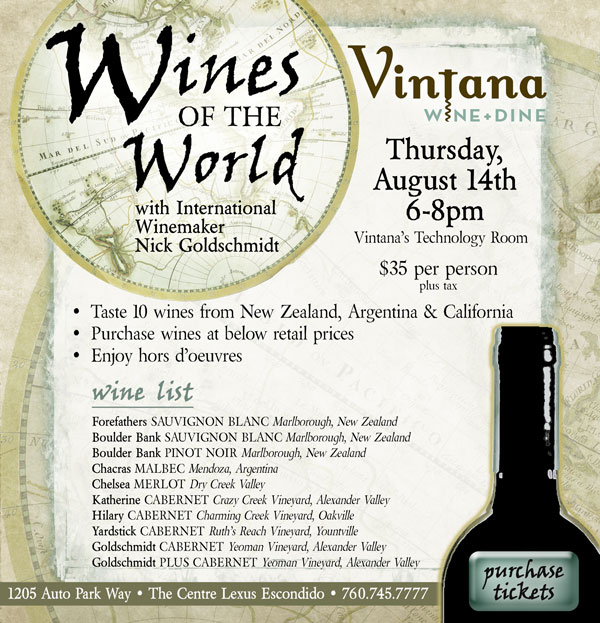 Leave a Comment
Telling Our Kids Stories About How Things Used To Be
Corks and Canvas: An Experiment in Pairing Wine with Art