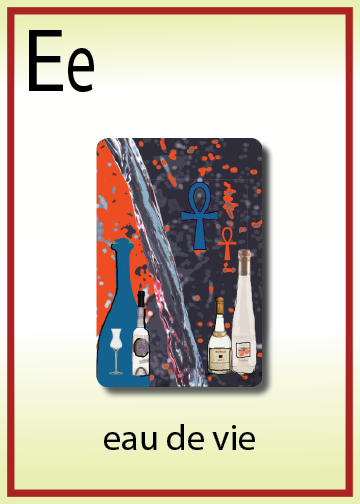 But in all actuality, Eau de Vie came to be because the water wasn’t parasite free.

Eau de Vie is French for “water of life”.  Back in the day, water contained many microbes and bacteria which passed on diseases and made life very unpleasant for human beings.  The solution was to drink fermented juices.  Eau de Vie is water (with a high proof) fermented and distilled from grapes and other fruits.  It was safe to drink and for some reason, made people feel more relaxed and jolly.

Eau de Vie is a clear brandy.  If it wasn’t for brandy, we would not have fine wines in California and other parts of the new world.  Heck, for that matter, wine would not be what is today.

Brandy was produced throughout the New World, Spain, France, Italy, Germany, Hungary and in every nook and cranny of the grape growing world.  It wasn’t until much later that people decided to use the same grapes for wine production.  And then wham bam…40% became 12-13%.  Fine wines were born, regions were carved out and Eau de vie became something that sat on the back bar waiting for an Italian tourist to order a Grappa.  Eau de Vie is the water that gave life to wine.