When should you return the wine in a restaurant? 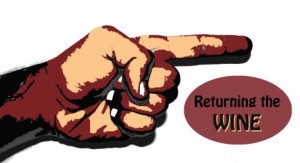 The question, “what do you do when a guest wants to return the wine”, came up in a recent twitter conversation on #WineChat a few weeks ago.  The real question was, “what do you do when a guest says the wine is corked?”  My answer was simple, take it back.  “What if the wine is not corked?” The answer again was, “Take it back”.   This led me to think more about the many times I am at the table doing the wine presentation and anticipating the guests reaction.  I know there are times when the guest tastes the wine and I see that they are not too pleased, but hold back from saying anything.  There are also times when the guest already has it in his mind to return the wine.  I’d like to share my opinion of when a guest should return the wine.

Lets take the first scenario, the guest picks his/her own wine.  In this situation it is assumed that the guest knows what he/she is looking for and picks a wine which he/she is familiar.  The guest tastes the wine and the wine is not as fruity, not as sweet, not as dry, not as tannic; it’s not what they expected.  The guest then decides to return it.  That is a No-No.  If the wine does not have a fault, (something we will address later) then he/she should keep the wine.  The wine should only be returned is the wine is faulty.  Just because the wine doesn’t taste as you thought it might, you do not have the right to return it.  If you would like that right, then buy insurance and ask for a recommendation.

Now lets take scenario number two, purchasing insurance, where the server or sommelier recommends a wine based on the guests preference.  The guest says I want a dry red wine, with soft tannins and fruity.  The server then recommends a young Cabernet from Howell Mt because he remembers the sommelier praising it.  However, upon tasting the wine, it’s obviously not soft and fruity.  At this point, the guest has every right to return the wine.  The server did not recommend a wine which met the guest’s expectations.  The wine might be delicious, but it was not what they had ordered.  It’s almost like ordering white fish and getting Salmon.   If you are unsure of what to order or unfamiliar with the list, ask the server or sommelier.  If you end up getting an ignorant server, then feel free and return the wine.  But even better, you might just get what you wanted.

As a sommelier, regardless of which scenario occurs, I take back the wine.  We are in the business to make friends, not to put people in uncompromising situations.  Remember, there are a lot of restaurants out there, and retaining returning guests ultimately falls on how you treat them.

One day I had a server come to me and tell me that one of their tables wanted to see me because they were unsure if the wine was good or bad.  The guest had ordered the Sadie Family Profadder Grenache.  They chose it themselves.  I came to the table and the gentleman asked, “Can you please taste this I want to see if you like it?  I think it might be bad, it is too acidic.”

I looked at the man and said, “Sir, I’d be happy to taste it but I agree with your description, the wine is acidic.  Why don’t you let me suggest another wine.”

For those not familiar with Sadie family, these are wines from South Africa that are all about terroir and minimal manipulation, the wines have high acid.  The gentleman insisted that I taste it. I told him that I knew I was going to like it, but it was probably not what he was looking for.  I granted his wish and tasted the wine, absolutely delicious!  It had a light color, beautiful red fruits and backed by mouth-watering acidity.

I looked at the gentleman and said, “this is absolutely delicious, however, you are right it has very high acidity, why don’t you let me take this back. I will surely enjoy it later tonight and I will recommend another wine for you. I brought him out a bottle of David Phinney’s D66, a Grenache from France which is deep and dark in color with big fruit and on the complete opposite spectrum of the Sadie Family.  The man, loved it.  He was pleased that we allowed him to return the wine and I was happy that I had a bottle of Sadie to savor later that evening.

This short antidote leads me to the next topic, wine faults.  The gentleman should not have returned the wine since it was his choice.  He should have asked for a recommendation.  He believed the wine was bad. However, the wine did not have a fault.  In this day in age when so many wines are beginning to taste the same, anything that is a bit different (the Sadie Family wines) is now construed as a wine fault. That is so sad.  Because the wine smells like earth or soil, that is not a fault. If the wine has high acidity, that is not a fault.  Everyone seems to think that wine should taste like California Cabernet.  They want their Pinots to taste like Cab, they see Grenache and expect it to taste like Cab, and if it does not, then it is a fault.  Well as we all know that is just absurd.  What if all our fish tasted like Salmon?

So what are wine faults?  Here are a few very common wine faults which call for a guest to return the wine.

Don’t be intimidated in returning the wine.  If you are unsure ask for a second opinion.  Asking your guests for an opinion will usually lead to them confirming your suspicion.  Your guests don’t want to make you look bad or disagree and risk the chance that they look bad.  Get assistance from the sommelier.  If the wine is just not what you wanted, then feel free to return the wine.  I can promise you that the wine will not go to waste.