Wine Nature and My Children 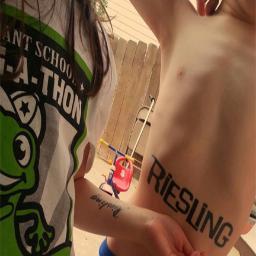 One of the greatest joys in my life is having kids.  Things that bring joy to my heart are wine, nature and my children.  Not in that order.  I guess I would put my kids first, then nature and then wine.  My children, @sonofasomm on twitter, are always coming up with the craziest ideas.  A while back my son wrote the 10 steps to drinking wine.   This past weekend my daughter wanted to make a commercial about nature.  Her kindergarten class has talked a  lot about recycling and being good to nature.  Earth day was a very important day for my daughter.  That day, her brother was misbehaving and hitting her.  So she went into her room and wrote letter to his school teacher.  When I arrived home that evening, I saw a letter outside in the mail box without a stamp with the following written:

I really didn’t think twice about it.  I later got reports from my wife that my son had a rough day and was not very nice.  After putting two and two together, I went back to the mail box and read the letter.  It was hysterical.  She wrote the following:

Titled: Luca is bed at home.

luca hit my mom and he hit me

he rit my gramos blat.  He did not tell the trooth.

Me and mom did not like it. He did dos things

And then she drew to faces with frowns.

The funniest part of this letter was that she was so concerned that he had misbehaved on Earth day.  These little things bring joy to my life.  But what is even more gratifying is when they look up to me and try to copy the things I do.  Not long ago, my daughter was sitting next to me while I was sipping on a glass of wine.  She wanted to taste it and she put her finger in the glass and took a taste.  I then asked her to smell the glass and asked her, “what does it smell like, apples or strawberries?”  She said strawberries.  I asked “what does it smell like, coconut or cinnamon?”  She responded cinnamon.  I then asked “does it smell like cranberry or plum?”  She responded cranberry.  As you might expect, she nailed the wine.  It was a red Burgundy and she hit all the aromas.  Since that day she is always ready to do the aroma test.  I have a mini somm in training.

Yesterday, she really wanted to do a commercial for her class.  She wanted me to film her as she described the meaning of nature.  As you might expect, it was a Saturday afternoon and I was drinking a glass of wine.  She grabbed the glass of wine and started walking around the yard telling me what was nature.  I was trying to hold in the laughter.  She was so serious in what she was doing, and that glass of wine took me over the edge.  It was all her idea, I just filmed.  The most important bit of knowledge I took from this commercial was that wine is part of nature too.  Enjoy.

Leave a Comment
Wines from Northern Italy are like Alyssa Milano
Viticulture vs Vinification Where do Wine Maker’s Stand?