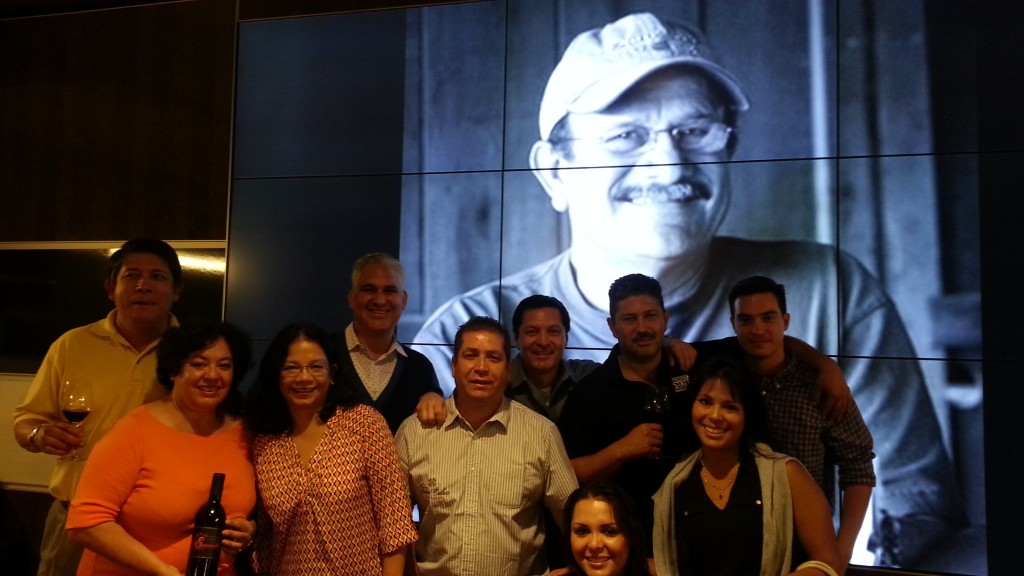 On Saturday, July 19th I connected with some of the most humble and talented wine makers in Napa Valley.  I am happy to call them my paisanos.  For two years I have been working with Tom Bracamontes of Total Brand Alliance and Latin American Wine Makers Alliance in creating an event which would showcase and honor the hardworking Mexican-American wine makers from Napa Valley.  Finally, we did it!  It was a great success!  At Island Prime restaurant,  overlooking the San Diego bay, the wine makers sat in a panel where they told their stories of grape pickers to wine makers.  Later that evening we drove North to Vintana in Escondido for a walk around tasting where they engaged one on one with guests and shared their wines and stories.  I was blown away by the positive responses from our guests and winemakers.  Everyone had an amazing time.

During my introduction I touched on why Tom and I decided to bring 8 winemakers to San Diego.  Many of you have read my blog post and seen the video about the history of San Diego wine.  Without San Diego, Sonoma and Napa would have not been producing wine. The first grapes were planted here.  The fathers of California wine, Agoston Harathzy and Cyrus Alexander first came to San Diego before moving North to profit from the Gold Rush.  At that time, California was Mexico.  General Mariano Vallejo invited the Americans to come to California, offered them land to harvest grapes. Americans had to become Mexican citizens to own land.  The process was fairly easy, because the Mexicans welcomed them with open arms.  As history would have it, it was not enough for the Americans and they wanted it all.  Hence, the Bear Flag rebellion occurs and with the help of indigenous people, they overthrew the Mexicans.  In a dramatic change of events, Mexicans became second class citizens.

As time passed by, Americans found the need to continue to expand their power and went over seas to join the wars in Europe.  When World War II started, many American youths joined the army.  This left a void in the labor force in California’s agricultural industry which needed to support the war effort.  The Bracero program brought many Mexicans back to the U.S. to work.  These laborers were under paid, worked in dangerous conditions and faced much discrimination.  Problems escalated when American soldiers returned home to find an increase in Mexicans in their towns.  Tensions were high and many Mexicans suffered from discrimination from the police, press and neighbors.  However, this labor force had now become a necessity for the agriculture business.  These Mexicans worked hard and earned less.  The economics was simple, keep them working as contracted slaves and see profits soar.

Many of the wine makers’ fathers came to the U.S. during this time.  They ended up in Napa picking grapes.  They put their head down and worked, paid close attention to the vines and learned how to make wine.  Their children have carried on their family’s legacy and have continued the business in honor of their fathers.  Their strong work ethic has paid off in the form of solidifying relationships with the land and other wine makers and growers in the valley.  Today, they are making wines with the same fruit that the most glorified wineries use.  However, their end product is one of pure heart and soul and zero marketing.

A question that was asked during the seminar was, “Why would we, as consumers looking through a wine list, order a bottle of one of the unknown Mexican-American wines versus one that we are familiar with such as Caymus?”

Ignacio Delgadillo of Delgadillo Cellars answered, “because at the end of the day you are getting a better value for the same or better quality of wine.”

However, I liked the reply of one of the guests who said to me later, “It’s like deciding where to eat.  Do you decide to go to that hole in the wall Italian restaurant nobody knows, where the owner came straight from Italy and cooks home cooked Italian meal? Or do you go to  Olive Garden?”  Clearly, it is the same decision you make when choosing a wine which has been hand crafted with heart and soul versus one manufactured to meet the marketing behind a label.

We also touched on the difficulty of distribution and marketing for these small production wineries.  Juan Puentes, of Honrama Cellars put it, “It was so much easier when I made wine without a label and sold to my friends and acquaintances.  But once I got a label and paid for permits and licensing fees, selling the wine became much more difficult.”

The Mexican-American wine makers struggle to compete in The Napa wine market saturated with large mega wineries and corporations pumping out juice for labels with large marketing budgets.  The price of land drives the price of the wines in Napa, but some seem to think that because they are rich and build an extravagant winery, they deserve to charge more for their wines.  Mega wineries and “cult” wineries hire the most sought after wine makers, viticulturists and consultants to build their brands. The opposite is true for my paisanos, the Mexican-American wine makers.  They are grassroots.  They have the “hands on” knowledge of the land and the vines.  They carefully craft their wines to fit their personal style.  They don’t have a label that needs to conform to their marketing teams year and year out.  The wine in the bottle is a direct result of their hard work, soul and art.

Enrique Lopez and Rosaurra Segura from Encanto Vineyards specialize in Sauvignon Blanc and Pinot Noir.  Enrique has been managing vineyards for so long that he knows the fruit so well and what he can and cannot do to the wine.  Rogelio from Volcan Cellars not only makes a robust high elevation Napa Cabernet, but he also makes wine in the Guadalupe Valley and grows avocados in Michoacan. He is a true man of the land.  Ignacio Jr. and Ignacio Sr. of Delgadillo Cellars make a wine that is not released until it is ready to drink.  Their latest release is 2005, a wine that has held its color, fruit, tannins and acidity.  Hugo of Maldonado Family Vineyards continues to craft Chardonnay that rival Peter Michael and Konsgaard.  They are rich, robust and more importantly retain generous acidity.  Oscar Renteria from Renteria Wines, has hired Karen Cullen to produce elegant and feminine wines from the fruit grown from his own hands.  Eric, the young son of Ignacio at Gallegos Wines is proud to represent wines that show typicity.  His relationship with ex-roommate Garret Boekenoogen has allowed him to make a Pinot Noir that some people at the seminar said it was the best Pinot they have ever tasted.  Juan and Miriam Puentes make Cabernet, damn good Cabernet that is approachable and honors their father, Honorio Ramirez Mata.  Lastly, Mario and Gloria Bazan of Mario Bazan Cellars work as a team to craft a Napa Cabernet which shows the magic of Mario’s workmanship and captures the true essence of Napa Valley.

I am so happy to have spent the day with these wine makers sharing their stories to an eager public.  I hope that we begin to see a trend where consumers start to support my paisanos, the under dogs.  The only thing missing from these producers, excluding Maldonado, is the word “Family” on the label.  These are truly family owned and run wineries. 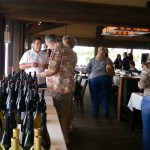 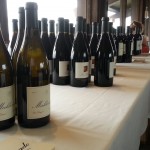 The line up, 10 Mexican-American wines 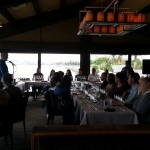 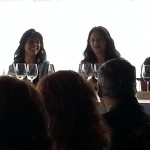 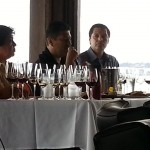 Hugo Maldonado and his Chards 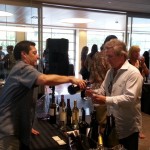 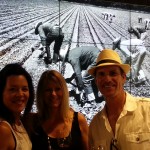 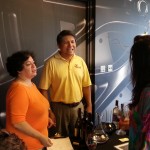 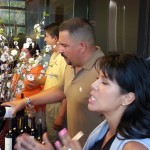 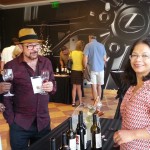 Gloria Bazan talks to the press 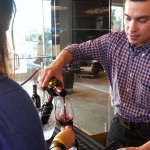 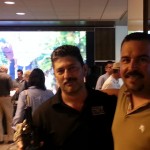 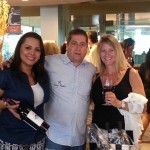 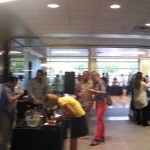 The tasting in action 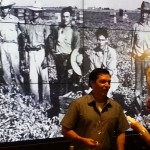 Tom Bracamontes the man that made it happen 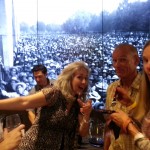 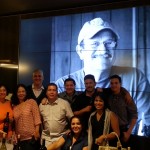 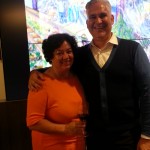