Running with the wines: Arinzano

I was invited by the folks at the Stoli Group to go to Navarra Spain for a visit of the Arinzano Estate.  Senorio de Arinzano was purchased by Yuri Shefler, owner of Stoli vodka from the Chivite family in 2015.  Yuri happened to vacation at Arinzano just outside the city of Pamplona and fell in love. He decided to do what any sane billionaire would do, he bought it.  What! Vodka and wine? How could that ever work?  What does a Russian vodka producer know about wine? Absolutely nothing! Guess what? It works. 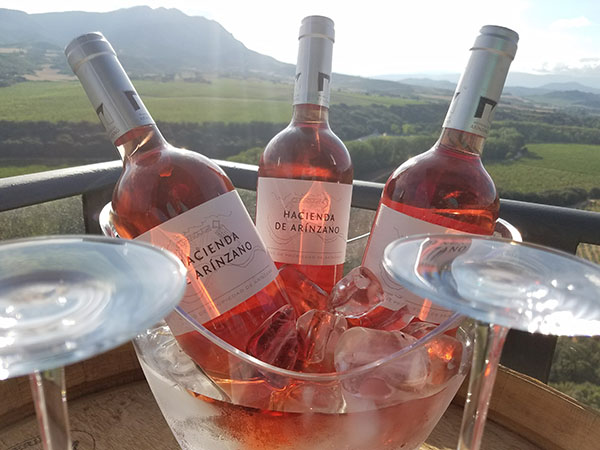 Can’t have enough rose, especially in a place like this.

The smartest business people in the world know how to invest, the most successful surround themselves with experts and let them do the hands on work.  This is exactly what Yuri did. Yuri hired Manuel Louzada, the man behind Numanthia as chief winemaker and CEO. Most importantly, he gave him carte blanch to “make Arinzano great again”.  Manuel is probably the most well known and respected winemakers in Spain. While Yuri was shopping around for side projects, he came across an equally as prestigious winery on the other side of the world, Achaval Ferer in Argentina. Manuel took control of this project as well. The vodka tycoon left Manuel in charge of two of the most important wine estates in the world.  What do you suppose Manuel did? 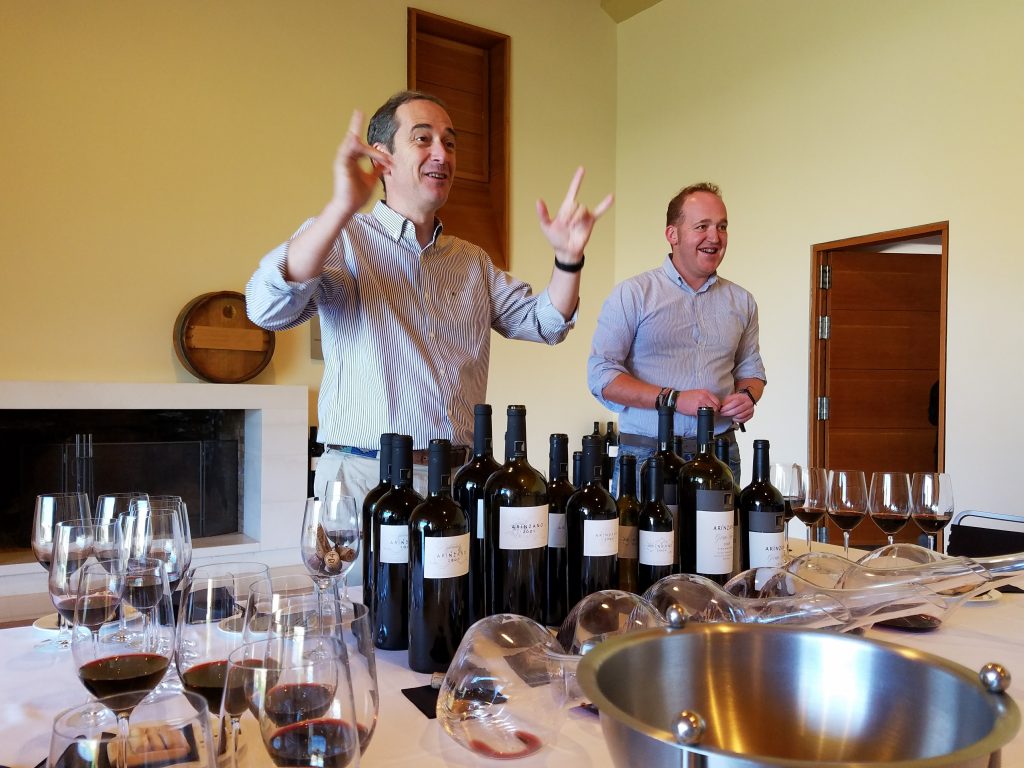 The enthusiastic Manuel Louzada with Cabernet wine maker, Miguel  tasting us through old vintages of Arinzano.

Manuel has been around. He spent many years with Moet Chandon and brought greatness to the Toro region with Numanthia Termanthia.  He did not do it alone, he always had a solid team around him. I am not sure if it was his outgoing spirit, his pursuit for perfection or his generosity; but he was able to drag his sales and winemaking team to Arinzano with him.  Bring a strong team together to a property where it is impossible to grow bad grapes, throw in a fat check book and you are bound to get some of the best wines in the world. 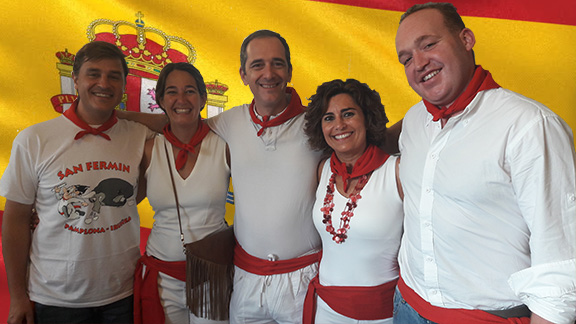 Arinzano is the first Vino de Pago in Northern Spain. A Vino de Pago is a classification given to unique estates which produce high quality wines outside the DO because of its soil, climate or terroir is so unique and cannot be matched elsewhere. Arinzano’s vineyards are devoted to mostly Tempranillo, Cabernet Sauvignon and Chardonnay.  It is nestled within hillsides facing North where a cooling wind blows continuously across the vineyards.  The soils are of decomposed granite with limestone. A small mountain range to the North protect the Pago from moisture and humidity. 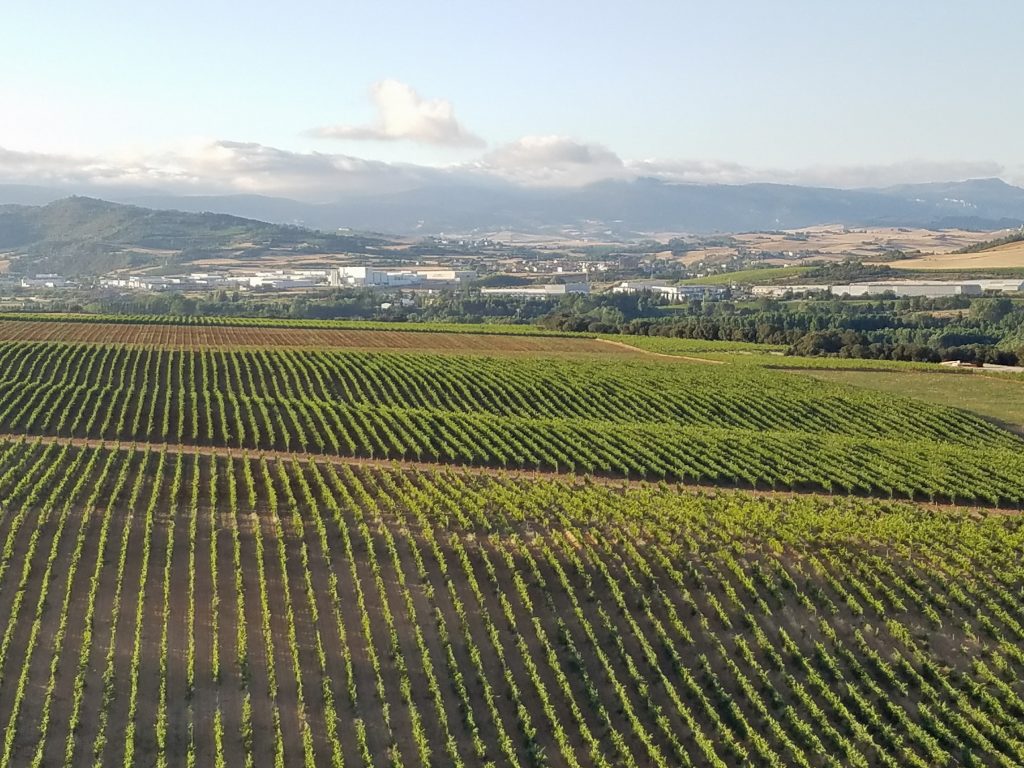 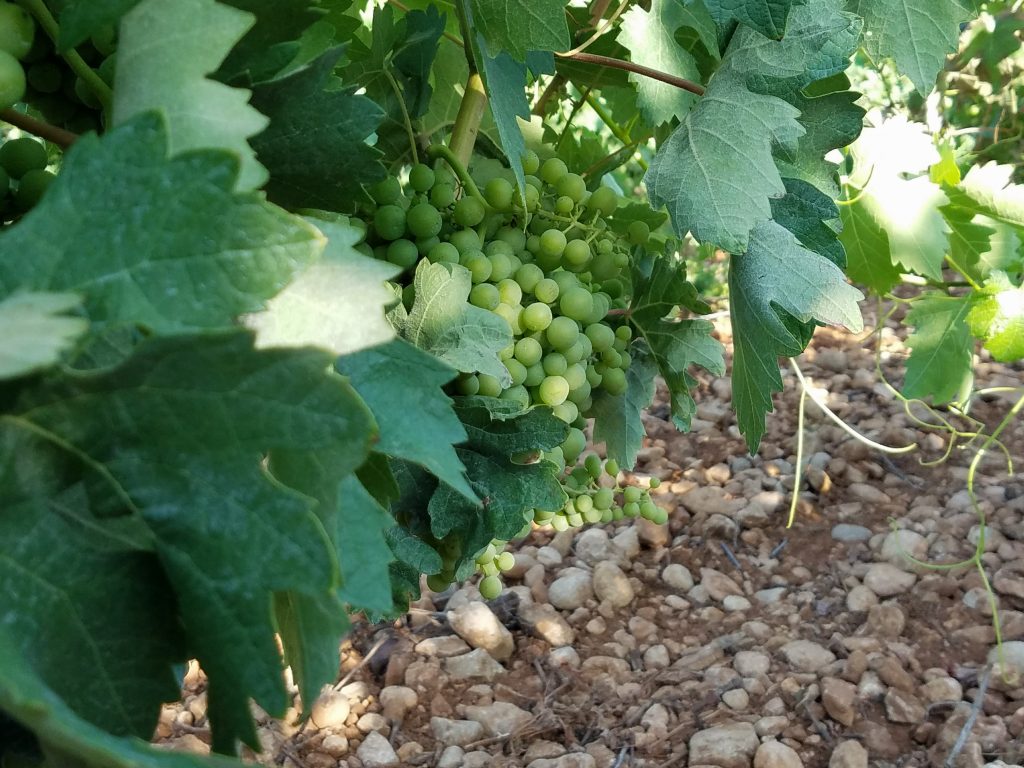 Manuel inherited an estate known for making incredible wines. He took the estate and perfected it. He changed canopy management on the Cabernet which removed the green pyrazine and increased the fruit flavors.  He changed the barrel program and now uses a mixture of coopers. Each barrel brings a unique attribute to the final blend. He invested in moving winery walls and machinery so that wine making is clean and efficient. I am talking about millions of dollars invested with the sole purpose of producing world class wines. 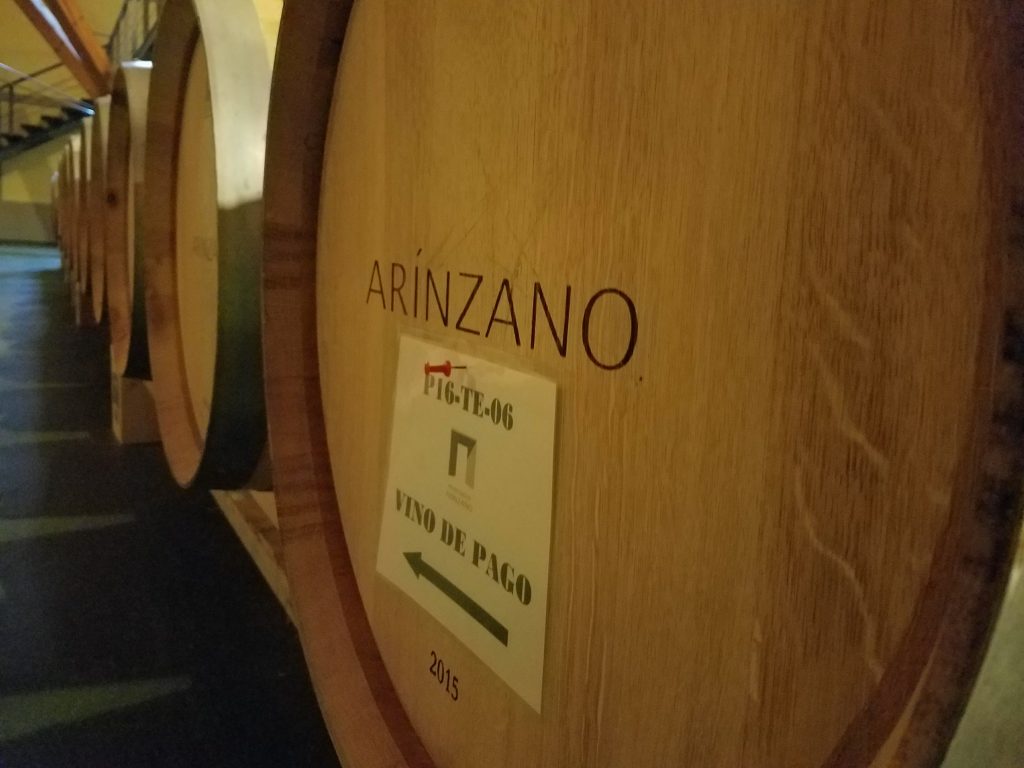 What I learned from this trip is that wind, soil, vines and sun are not the only things important in making quality wine. What is equally as important is culture. The folks at Arinzano embrace this and made sure that we understood.  Instead of staying at the winery and discussing viticulture and oenology, they also showed us how important the Navarra culture is to the wines at Arinzano. We spent the day in Pamplona. We watched the running of the bulls, sat through a bullfight and enjoyed an amazing local meal in a Michelin star restaurant. We danced with the people of Pamplona at 10 in the morning, we danced with them in the afternoon and continued dancing in the midnight hour.  The culture is festive with a love for live.  We also visited San Sebastian where we got to see where the locals vacation.  More importantly we got to stand and look out at the vast ocean, feel the wind blow on our faces. The same wind which 150 km away is blowing on the vines at Arinzano.  Great wines are made by great people, great cultures and great places. Arinzano is one of those wines. 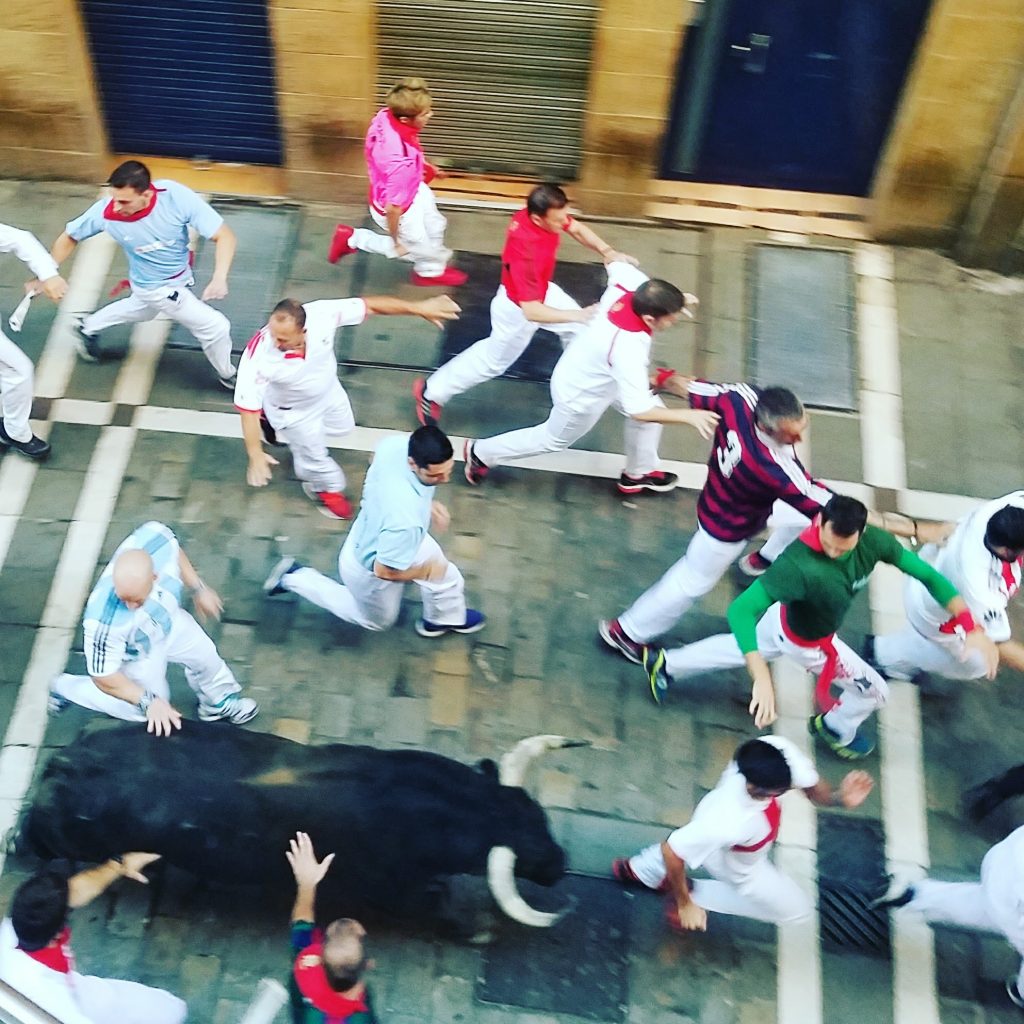 running with the bulls 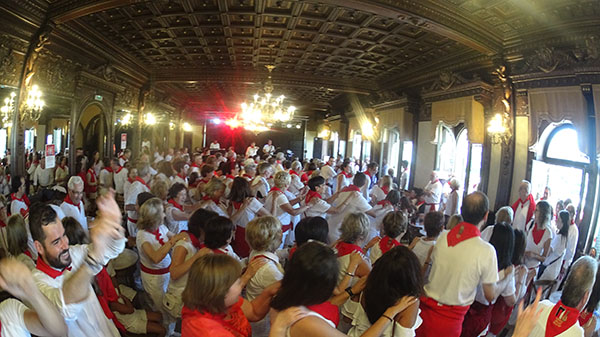 Dancing at 10 am in Pamplona 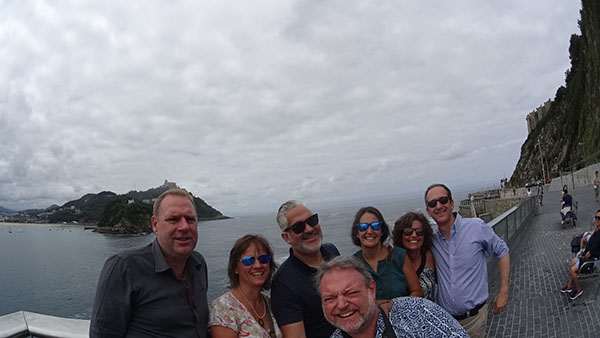 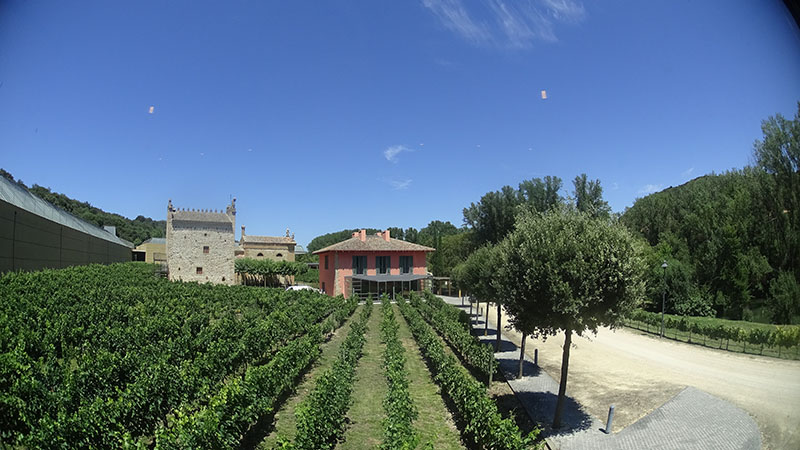 Leave a Comment
What You Might Not Know About Aussie Wine
CRG Wine Month: Explore What You Love About Wine