Now I Know My Wine-Phabet: P is For Phylloxera 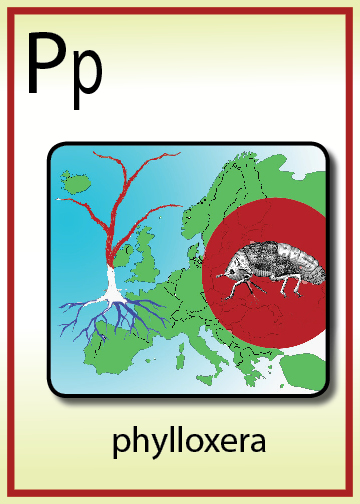 I give many wine seminars for my staff and wine club members, and I can never get through a seminar without talking about Phylloxera.  What is Phylloxera?  It’s only the most devastating “NO SEE-EM” in viticulture.  When I was on the beaches of Australia “NO-SEE-EMs” were these little sand flies that made my life miserable.  Every night they would have a feast on my legs and back.  Phylloxera is not a sand fly but a small louse that feasted on the leaves of North American grape vines.

The gypsy aphid boarded a transatlantic ship and landed in Europe.  When Phylloxera arrived in Europe, it changed its eating habits and instead of feasting on leaves, it preferred the delicate deliciousness of the root-stock.  I am not sure if the root stocks had large amounts of estrogen, but the little mite transformed into an asexual louse, and the women started to reproduce only women.  This made it very difficult to stop the reproduction habits of the aphid.  It devastated the European wine industry.  The solution was to graft European vines on North American root stocks.

The silly part was that the money hungry Americans did not change their ways and the little pest devastated the vines of North America.  The little sucker went on a world-wide excursion eating all the vines and roots she could find.  Unlike the “NO-SEE-EMs” in the sands of Australia, Phylloxera did not fair well on sandy soils.  Luckily, vineyards planted on sandy and schist soils were safe.  This included areas of Australia, Washington State and Chile.  One of my favorite whites, Assyrtiko from the Greek island of Santorini remained Phylloxera free.

There was an up-side to all this devastation.  Viticulturists and winemakers began reconsidering what to plant in their vineyards.  If it were not for Phylloxera we might be drinking wines from the left bank of Bordeaux  predominately made of Malbec.  Viticulturists discovered new regions as they evaded Phylloxera.  Today winemakers and farmers are always on high alert, they are in constant watch over this “louse-y” aphid. 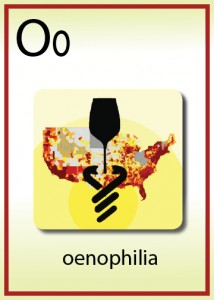 Leave a Comment
Now I Know My Wine-Phabet: O is for Oenophilia
The Sommelier Challenge International Wine Competition 2012